This month, Google introduced the latest Chromecast device, catered to those who are all about content consumption. While past Chromecast units were great for casting things from your phone or computer, this new Chromecast with Google TV has an interface built directly into it, bringing all of your favorite shows and movies to the forefront of the experience.

While you’ll see plenty of movie and show recommendations on the screen, you’ll also find a built-in channel guide for YouTube TV, which really makes it the ultimate dongle for subscribers to that service. Is it good for anybody else at that $50 price, though? Let’s take a quick look.

This is our Chromecast with Google TV review!

I actually quite like the concept of Google TV, though, I’m a bit hesitant on the execution as you’ll see in the section below. However, for the most part when it comes to day-to-day usage, I’m a fan.

What I appreciate about it is the ability to quickly dive into my shows, regardless of which service they’re from. Some services work better than others, but for the most part, if I’m binging a series from HBO Max or want to finish a movie I was watching on YouTube TV, those programs get pinned to my home screen automatically for quick access at a later time. Additionally, Google does what seems like a relatively good job at recommending shows I might be interested in. For example, I never started Barry on HBO, but since it was recommended to me, and is rated very well as shown in the recommendation itself, I started watching it and I’ve really enjoyed it. So while sometimes the recommendations may seem a bit wild, they can be useful if you’re into discovering new content. 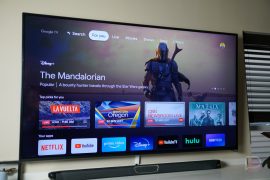 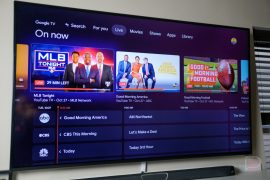 On the top portion of the UI, there are tabs, one of which is labeled as Live. Now, as my title for the review suggests, this Live tab is ideal for those who are subscribed to YouTube TV. When on this tab, you’ll have a real-time channel guide for YouTube TV, which is insanely clutch since I don’t need to open the YouTube TV app to see what’s on. What do you do with if you’re not on YouTube TV? Don’t use it, I guess? There’s another tab for Library, but we’ll dive into that a bit later.

If you need a real layman’s breakdown of what the Google TV software experience is, I see it just as a special launcher for Android TV, which instead of looking like an app jukebox, brings the content of select apps to the homescreen and really lets you dive head first into movies and shows. Considering how much of a visual person I am (I like shiny colors and things), I like this approach just fine, though, as I’ll get to below in another section, others can struggle with.

For those who don’t already have a TV with Google Assistant, it’s a great starting point should you be looking into getting more smart stuff in your home. And if you already have a smart home up and running, your TV can become a great control hub for various aspects, given the full integration with Assistant via this new Google TV interface.

For example, I have a Nest thermostat connected to my network and Google account, which allows me to control the home’s temperature from this Google TV by speaking into the remote, “Set temperature to 69 degrees.” I can also check my front door because I have a Nest doorbell connected, too. It’s integration like this that makes the user feel like they have instant access to things across their home, which can be seen as either genuinely helpful or that we’re all becoming extremely lazy. I think about those with disabilities, though, and the ability to control devices with a voice can be very helpful. Not everyone is able to simply get up and run to the door or change the home’s temperature while watching TV. With Google Assistant, some tasks are made much more easy and I don’t think that should ever be labeled a bad thing.

At just $50, there’s barely anything to complain about with this thing. It’s a little plastic dongle that can turn your older TV that lacks any smarts into a full blown smart TV with Google Assistant. This product reminds me of the original Chromecast and its low price, where really, there’s no reason not to buy it if you’re in need of one.

Can you spend more and get cooler features? Sure, you can buy a SHIELD TV and get NVIDIA’s cloud gaming service and also have 4K AI upscaling which is badass, but for $50, this Chromecast is tough to top. I mean, what more do you really need? For me, I only truly need that deep YouTube TV integration and quick access to my favorite titles. That’s all I use my big TV for. Others use their TVs for more, so maybe this Chromecast can’t do enough, but if you’re looking for what’s technically a barebones experience, $50 is a steal.

This Chromecast comes coupled with a cute little Bluetooth-powered remote that also offers IR. It has buttons for Back, Google Assistant, Home, Mute, YouTube, Netflix, Power, Input, plus a volume rocker. There’s also a d-pad for controlling what you want to click on.

While it’s small and plastic, it does its job well, especially when you consider how easy it is to program for use with your TV and other IR-capable things. When setting up the device, the UI walks you through the process of programming it to work with your other entertainment things. The process was easy enough for me, and since I’m a total dunce when it comes to AV equipment, I can say that it should be easy for most other people.

Kellen mentioned to me that he had issues with the IR blaster not working consistently with his television, but I haven’t had that issue. It’s possible that once this product gets a bit older and Google has time to send out updates, connections can become better.

While I do wish it was a bit larger for my hands, I think it’s a dope little remote. 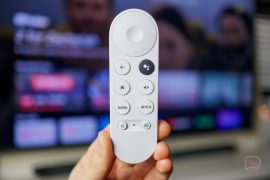 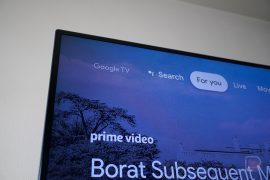 What Could Use Some Work

One issue some might have with the new software is if you used the old Google Play Movies app for Android TV. On this device with Google TV, all of that content is saved in the Library tab, but the way it’s formatted isn’t ideal. In fact, it’s such a removal from the vibe of the For You tab that’s almost like, “wtf?”

What Google did was replace the entire Play Movies & TV app with this new Library tab, but then also incorporated additional things into the tab. They added saved DVR titles from YouTube TV (a nice touch that I appreciate), as well as added a spot for your Wishlist from Google. While that’s a couple of cool things, the UI is seriously jacked when it comes to just going through your own movies and TV shows.

I don’t personally use this tab, but Kellen does, and he despises what Google did. I’ll have him explain what’s happening here.

As he explains, “It used to be easy to open the Play Movies app and look through our library of movies and shows. Now you have to go to some Library tab and then scroll horizontally through your library. It’s a bad UI that makes it hard to find anything, and once you do, the dumb horizontal 1-line scrolling takes forever to find anything.”

Previously, the Play Movies app displays all of your movies and shows in a nice big UI with all of the covers for each title. It’s easily navigable, but with the new UI, you have to scroll through a single line of titles, which is obviously not as user friendly if you own a lot of titles.

Kellen also says, “We also use the Play Movies app to find new release movies since they have their own dedicated section, but on this, they put everything into the New Movies section, including titles that are old, but is ‘new’ to YouTube TV.”

The other major pain many might have is the recommendations. Now, if you’re subscribed to every service under the sun, you’ll love this. However, if you only subscribe to Netflix for example, I could see it becoming very frustrating getting recommended titles that you can’t even watch. Seems dumb, right? When setting up the device, you can tune these recommendations a bit, but there needs to be more done in this category.

There’s only so much stuff I can watch at a time, Google!

Should You Buy One?

If you subscribe to YouTube TV, I fully recommend this product, just for the live TV guide. Oh my goodness, so nice to have that. However, if you don’t enjoy Google throwing recommendations down your throat, maybe you’ll be better off with plain ol’ Android TV. Both are great options, and while I hate to say it, there’s no real wrong choice, and ultimately, it’ll come down to price.

What’s great about this is the price. Get it, try it, and if you don’t like it, just return it. It’s $50! Totally worth the experiment.

DEAL: AUKEY Hosts Solid Savings on Wall Chargers, Portable Chargers on Amazon (Up to 42% Off)

Samsung Galaxy A12 and Galaxy A02s Launched with 6.5-Inch Display