Gift Idea? Sylvox Outdoor TV With WebOS is Perfect for the Deck (or Home Gym)

Over the past year, I’ve been on a mission to make my garage a gym away from the actual gym, because sometimes, you just want to get in a workout away from other people. I originally had an old crappy LG plasma TV up on the wall of said home gym, but because my garage faces south and the TV was on the back wall, there was essentially always a nasty glare on the screen.

In a stroke of good luck, a company called Sylvox recently reached out and offered me a chance to try out its Deck Pro QLED television, a TV designed to live outside on a deck, patio, or any sort of environment where the elements and partial UV light could be an issue for a regular TV. I accepted the opportunity and now here I am to share my experience.

I received the TV in a massive wooden crate, similar in appearance to something you’d find in Hangar 51 (Indiana Jones). At least we knew it had arrived safely. I pulled out the TV myself and got it ready for mounting onto the wall. The first thing you notice about the TV is the metal case that it lives in. This thing is built like a tank, weighing in at 58 lbs. Besides it being heavy, it actually looks really slick and super industrial. I quite like it. Once up on the wall and plugged it, it was time to give this TV a spin.

Specs wise, the television features a 55″ 4K UHD QLED display (3,840 x  2,160) with a peak brightness of 700 nits, IP55 water and dust resistance, plenty of inputs and outputs for all of your content needs (three total HDMI inputs), and the software is LG’s WebOS 5.0. This is actually my first experience with WebOS and it’s quite nice, featuring a content store that has all of the apps I could possibly need for either outside or my garage gym. All of the good stuff came preloaded on the TV, too, such as Netflix, Hulu, and all of that stuff. 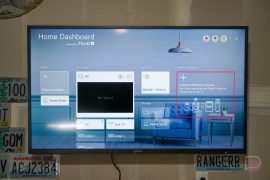 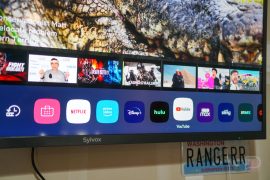 As for the TV experience, pretty solid. For my use, which is in a relatively bright garage when the door is open, the TV is plenty bright and thanks to the screen that is on top of the display, my issues with glare are not nearly as bad. And given the television is built to withstand the elements, not just wet and dry, but also hot and cold (rated at -22°F to 122°F), I really don’t have to worry about it being out in the garage and freezing during the winter months. When it’s hot, the unit has a robust ventilation system, which you can unfortunately hear really well when you aren’t watching content. The built-in speakers are decent enough, but most folks will likely want a sound bar, just like with any newer TV. If you plan on using this out on the covered deck or patio, the construction of the device will certainly leave you feeling as if your investment is well protected. It’s seriously constructed really well. The back panel is secured by a number of screws, but when removed, you can access all of the inputs and outputs. For cable management, you simply slide the cables through a piece of hard foam on the bottom, which ensures no water can creep up into the electronics.

On the software side, WebOS 5.0 is really nice. However, if you’re more of a Google TV/Android TV person, simply hook up a Chromecast or whatever system you’d prefer. Back to WebOS, its content store has all of the latest and greatest apps, with overall performance of the unit being snappy and responsive. This does not perform like a slow hotel TV, that’s for sure. The unit also comes with two remotes, with one featuring the pointy (Magic Remote) feature that makes you feel like you’re playing a Nintendo Wii. I wish my living room’s Sony TV had this. It’s a really nice touch. Voice control is also onboard thanks to Amazon’s Alexa. 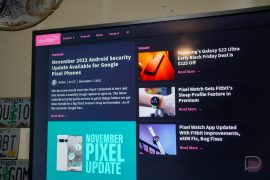 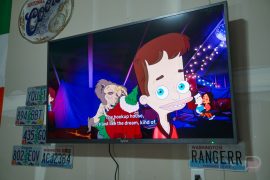 While awesome that this television can live outside and withstand a beating, there is one major downside — the price. It’s apparently not cheap to have such a device, with this unit coming in at $2299. That is obviously not cheap and you can get some seriously nice televisions for sub-$2K. However, can they withstand the rain? Unlikely. Currently, Sylvox is hosting a holiday sale on this model, bringing the price down to $1799. That deal is only available via their website, with Amazon not reflecting the sale price. If you have an amazing outdoor area (or garage gym) that could benefit from a television such as this, give it a look.

You Can Now Precisely Google Search Your Queries With Topic Filters