LG decided to get a bit radical with hardware design this year, and you know what, it’s really refreshing to see a company take chances these days. Part of a new Explorer Project, it’s my belief that the LG Wing wasn’t designed to sell a million units, but instead, just show that there’s plenty of creativity and joy in making fun smartphones at the LG headquarters. Not many phone makers have the resources available to toss at experimental projects, so as consumers, we need to enjoy that phones like the Wing even exist.

This thoughts piece is in place of a typical review we’d write. Because this phone is not expected to be purchased by many, we’d rather focus on the overall design of the phone instead of covering every single aspect. Below I’ll provide my thoughts on the LG Wing, including a couple of things I like.

Obviously separating the LG Wing from your conventional looking smartphone is its swiveling dual display design, reminiscent of LG’s old VX9400. The idea behind this design in 2020 is that users can do some fun multitasking things, such as running two apps simultaneously or having controls for your main app appear on the smaller display. It’s compelling, and hell, it’s plenty fun to swivel and play with, but it’s simply not necessary.

Before diving into uses, let me quickly address the actual swiveling of the hardware. It feels awesome, with the swiveling mechanic giving a very sturdy vibe. Like, I don’t think it’ll ever just snap off, which is a good thing. It doesn’t feel cheap either. It feels solid. I don’t know how else to describe, but LG did a good job with the actual construction. I love swiveling this thing open and closed, even if I’m not actually using the phone the way LG may have intended.

Size wise, the main display measures in 6.8-inches, an OLED panel with a resolution 2460 x 1080 and a refresh rate of just 60Hz. The smaller secondary display measure in at 3.9-inches and is also an OLED panel. Both panels look fine, with plenty brightness and color between them. However, if you’ve read any of my reviews from 2020, you can likely assume that I’m disappointed this $1K smartphone isn’t equipped with at least a 90Hz refresh rate. Oh well. 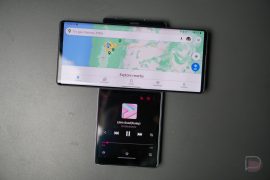 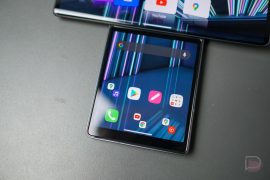 Now, for the software, LG did a couple of neat things. For starters, there’s a dedicated secondary launcher that brings up an enhanced UI for the dual displays when the phone is swiveled open. On the top you have an app icon list, where apps and games designed to take advantage of the design are shown. Apps like YouTube allow users to play their videos on the larger top display, while playback and volume controls appear on the bottom smaller display. It’s a great touch and looks pretty sweet. However, these playback controls don’t carry over to many other apps.

For gamers, select games offer you to view the main gameplay on the top display, while play controls or maps are shown on the bottom display. The main game LG highlights with this is Asphalt 9, a racing game that has you racing on the top display while a map of the level is displayed in real-time on the bottom. While it looks awesome, it’s not actually comfortable to play because the game’s main controls are still located on the top display. While players can change up the controls to taps and tilts, the buttons are the default/recommended way to play. Failed integration right there.

Back before the phone was released, what I think was possibly a controlled leak took place in South Korea, which showed someone in a vehicle with navigation taking place in a maps app, as well as music playback on another app. This, to me, is the primary “cool” feature for the Wing. Basically, something perfect for those stuck inside their cars all day, so commuters and gig drivers. It works great and the software has nifty shortcuts you can manage that allow you to open two apps simultaneously. For example, I can open YouTube and Chrome at the same time or open Maps and Spotify. This is very useful, and as you can see, this phone is a cup holder’s best friend.

While there are some cool use cases for Wing, I never found myself attempting to change my habits to better integrate this phone’s dual display design into my life. I’d use it if it made the overall experience better for more than a few apps, like when taking videos, but when you’re out and about, all it really does is make the device rather cumbersome. If I’m just sitting on the couch, I only ever used the main display and never touched the swivel unless I needed something to keep my hands busy. And that’s my main takeaway from the Wing: It’s totally cool and neat, but not necessary when it comes to getting things done on your smartphone.

I’m ultimately comfortable in telling you that all of these special dual display features are achievable perfectly fine on a single display, with exception to the specialized gaming controls. Besides that, you don’t need two displays to run two apps on an Android phone. What the Wing offers in this regard frankly isn’t worth losing out on other things, like a better software experience and a higher refresh rate display.

There’s one thing LG did on the Wing that isn’t getting enough attention, and of course, it’s LG’s continuing domination of video capture. On the Wing we have three rear-facing cameras — a 64MP standard, 13MP ultra-wide, plus a 12MP ultra-wide with “Hexa Motion Sensors.” It’s not necessarily the sensors I’m gushing over, but a new Gimbal Mode that’s built into the software. This thing is awesome, people. 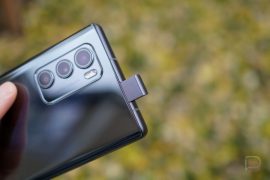 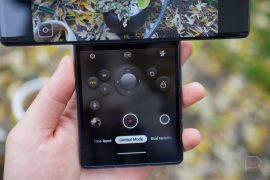 With this Gimbal Mode, users can record some seriously smooth videos, complete with controls you’d find on an actual gimbal. There are controls for pan, tilt, as well as a follow mode. And thanks to the aforementioned camera with its Hexa Motion Sensors and triple-axis stabilization, I bet people way more creative than me can get some stunning shots. I’ve had fun playing with the gimbal quite a bit and it makes me wish the weather was currently better in the PNW. I’d love to take this phone out to the trails with a mountain bike and see the results. Alas, I’ll have to wait a while and settle for LG’s own stock videos.

Should you buy the LG Wing?

I’ll make this real simple: No, you shouldn’t go out and buy the Wing. I wouldn’t recommend it to anyone, even those who want to be Instagram influencers and YouTubers. I’m not even going to recommend it to the commuters and gig drivers out there. The LG Wing is purely a sweet concept phone that LG decided to actually make, and at $1K, you can do better. If you really want a crazy design, I’d have you wait for LG’s next Explorer device, suggested to feature some type of rollable display. That looks much more useful in terms of everyday usage.

Samsung’s Illustration Offers a Glimpse into Future of Foldable Phones